Why Believe in the Risen Lord?

> Featured Stories > Why Believe in the Risen Lord? 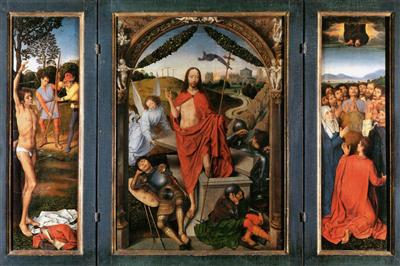 Why Believe in the Risen Lord?

Easter is more difficult for us to grasp than Christmas is. The birth of children lies well within the realm of things we know; resurrection of the dead not so much. God’s coming into our world connects with human experience, therefore; Man’s going into God’s world goes beyond it. Moreover, the skepticism of our culture assumes that belief in the resurrection is like belief in Santa Claus – it’s something you leave behind around the third grade. The general view is that science has “proved” that resurrection cannot happen, though it’s not clear just how science is supposed to prove any such thing: shall we find crucify several sinless Sons of God and see if any of them rise from the dead? I suspect that when people invoke “science” what they really mean is what humans have always known, that dead men do not come to life again. That may be commonsense, but it is not exactly a Newtonian law.

The common explanation for the New Testament accounts of Jesus’s resurrection – an explanation often presented as if it were some brilliant insight, though it is in fact utterly conventional – is that “resurrection” means that Jesus “lived on” (metaphorically) in the memories of his friends, and in their transmission of his teaching and example to others. (Not insignificantly, those who hold this view about the resurrection always view Christ as only a great moral teacher, not a redeemer, and are legalists who look to earn divine favor by the performance of good works.) Over the passage of time, they say, in a process like that of the children’s “telephone game”, what were originally vivid metaphors for a cherished memory were treated as literal statements by the credulous and the conniving. Such a process would require the passage of more than one generation, and certainly the death of all the eyewitnesses, who would have set the record straight; yet there is simply not enough time between the events of 33 A.D. and the appearance of the first New Testament writings for this generational rollover to have taken place. Those writings start to appear about 20 years after the crucifixion (and possibly even earlier), and when they did so, the claim that Christ had risen from the dead was already the core conviction of the entire Christian community. Early Christians disagreed vociferously about many things (as Paul’s letters bear witness), but the resurrection of Jesus was not one of them. As Paul writes to the Corinthians, in a letter that can be safely dated to the early 50s A.D., “if Christ be not raised, your faith is vain; ye are yet in your sins. Then they also which are fallen asleep in Christ are perished. If in this life only we have hope in Christ, we are of all men most miserable” (1 Cor. 15:17-19). Christians who (in accord with conventional pagan thinking of their time and ours) deny a future resurrection would have to deny the resurrection of Christ taught by the apostles, which would be to deny any kind of salvation worth having and render Christian believing pointless. Paul could only make this reductio ad absurdum if he were confident his readers would see it was absurd also.

There is no trace of Christians who deny Christ’s resurrection anywhere in the New Testament, or in its earliest dateable elements: which means that with astonishing speed after 33 A.D. Christians accepted and proclaimed that Jesus had risen from the dead. In that time so close to the events in question, with numerous living eyewitnesses active in the Christian community, any simple misunderstandings (wrong tomb, grave robbery, resuscitation) would not have survived or taken root. They not only believed and preached it, they were willing to die for this belief, as Stephen and James did in the late 30s or early 40s A.D. No one dies for a metaphor! They died because they were confident that Jesus had overcome the powers of sin and death, and made it possible for human beings who trusted in him to live a new life in God’s favor.

This was published in the St. John’s Parish Paper on Sunday, April 17, 2022. Image: WikiArt.org