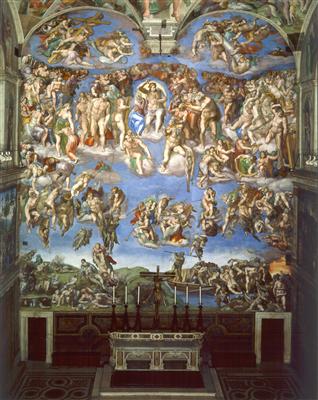 Michelangelo’s fresco of the Last Judgment in the Sistine chapel was unveiled on All Souls Day 1541, and it is said that Pope Paul III and his cardinals sank to their knees in awe. In scale, complexity, and subject it is overwhelming. It is also a work of the artist as theologian, and a witness to hopes for Catholic reform that were evaporating even as it was unveiled. Though long admired, the most perceptive interpretation of the work was made by the late Leo Steinberg, a Jewish Russian-American art historian who united a rare understanding of Christian doctrine and an interpretative eye, and I will be drawing freely on his work.

When Michelangelo began work in 1535, the Sistine chapel was already fully decorated, both by his own ceiling, completed in 1512, and by wall frescoes completed in 1482 by a previous generation of Renaissance masters. All these frescoes were comprised of compartmentalized paintings set within architectural frames and in thematic sequence – the life of Moses in parallel with the life of Christ on the lower walls; the popes in succession to Peter between the windows; the ancestors of Christ in the lunettes under the vaults; and the primeval history beginning with creation on the ceiling vaults themselves. With the exception of the ceiling frescoes, all these processional sequences had their beginning on the west wall, all of which, including Michelangelo’s own work, were destroyed to make way for the new commission. Instead of compartmentalized paintings, the entire west wall was treated as one pictorial field without architectural framework or division. The effect, as Steinberg says, “is to negate the wall’s presence… so that we seem to be looking out into it, as from an open hangar”. This effect corresponds to the painting’s theme, for in the Lord’s coming in judgment the veil of visible appearances is ripped away, the invisible realm of spiritual reality is unveiled. We do not look out into a blue sky or a distant view; instead we see a densely-populated foreground of comprised of many figures mainly depicted in heroic nudity and complex action, centered on the figure of Christ, who seems to be rising up from his seat, striding forward, and advancing into our space to take control, an effect subtly strengthened by Michelangelo’s refacing of the entire wall with fine bricks laid not in a vertical plane, but canted to lean inward with a ten-inch overhang at the top. Christ and his companions are literally “leaning in”.

Michelangelo’s painting of the Judgment retained a traditional scheme: an upper tier populated by angels, a middle tier by Christ and the saints, a lower tier by the blessed and the damned; yet his treatment is anything but conventional. First there is the heroic nudity characteristic of Michelangelo, for whom the nude human form was the primary vehicle of spiritual meaning; but those nudes barely escaped destruction by Counter-reformation prudes. (After his death, one of his followers was assigned the thankless task of covering up the exposed pudenda, and for his pains was dubbed Il Braghettone, the Breech-Maker.) Yet the Christian hope is precisely for the resurrection of the flesh – some to shame, and others to glory. As Steinberg says, “The resurrection promised in Scripture is not the homing soul released from its fleshly encumbrance, but this mortal taking on immortality, and this corruptible, incorruption (1 Cor. 15:54). The pledge of St. Paul’s famous phrase Michelangelo’s fresco confirms by way of visual paradox: the bodies of the resurrected loom dense and massy, yet – being summoned – they spring, surge, and coast on a buoyant medium, the invitation of Christ. One heavyweight near the left margin wants help, crossed his sturdy wrists to give his helper a handle; but the friend who stoops to his aid raises him with delicate fingers, as if hoisting a feather”. Thus, as Steinberg says, “The awakening of the buried dead is the supreme act of grace, the wresting of victory from the grave”. Yet the modes of grace’s operation are many and various: if some ascend through prayer (the two figures being pulled up by a rosary), others float upward, borne aloft by love; “figures in private transport alternate with paired fellowships, trust, mutual aid”. In those who are ascended, he notes, are “scenes of reunion and exultation, expressed in motifs of unguarded passion and tenderness”, embraces and kisses. The resurrection of the flesh is the redemption of our entire humanity, the knitting together of all that death has sundered, not just body and soul, but friendships and loves. So far we have looked at the figures on the viewer’s left (Christ’s right) who are rising to glory; next we shall look at those on Christ’s left, who are plummeting to shame.

This essay by Fr. Dunbar was published in St. John’s Parish Paper on Nov. 13, 2022. Image: The Last Judgement by Michelangelo, Wikiart.org