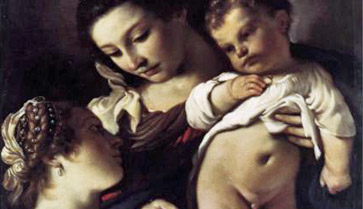 After a mini-sabbatical of almost three months, I owe you some account of the time I spent, and I will begin with the first part, in Italy. Let me first express my gratitude to those who handled everything so capably in my absence, and especially the Associate Rector, Fr. Jameson, who rose to the challenge, mere months after his ordination as a priest; and also Mr. Steven Vanderlip, Fr. Patrick Hunt, Bishop Lambert, Mr. Steven Branyon and the Choir.

As I have a deep interest in the art of Christian Italy from the 12th to the 18th century, it made sense to spend the first half of my sabbatical scratching that itch! I was like the proverbial kid in the candy store, and in my cardio-culture completism, I regularly logged fifteen to twenty thousand steps a day, chiefly in Naples and Florence.

Naples lies in one of the most beautiful natural settings in the world, a site on the shore of the Gulf of Naples, ringed by steep hills, and dominated by the unmistakable double cone of Vesuvius. The historic core of the city is sort of like the Bronx; but a Bronx whose narrow streets were first laid out by the Greeks in the 6th century BC, whose towering tenements can be Baroque palazzi, and whose many churches often incorporate the spolia of Roman temples in Gothic structures overlaid with a profusion of early modern Baroque ornament. Outside the narrow, dark street is crowded with motorcycles, pedestrians, eateries, shops, stalls, laundry hung out to dry, garbage and graffiti cheek by jowl with glamor; yet with a few steps through a church door, you pass into another world of beauty and majesty. The juxtaposition gives Naples its special, somewhat edgy character.

You can also ascend to the hills that ring the city, to the Certosa di San Martino (a miniature monastic city in itself), and to the former summer palace of the Bourbon kings at Capodimonte, both now important museums of art. The chief interest for me in both places was their holdings of 17th-century Neapolitan painting, a school that arose in response to a short visit by Caravaggio to Naples in 1610 and not particularly well known to the wider world. To my good fortune, the entire top floor of the Capodimonte was given over to a magnificent exhibition, Oltre Caravaggio, which, beginning with that master’s Scourging of Christ, traced the strands of development “beyond Caravaggio”, in painters like Battista Carraciolo, Massimo Stanzione, Jusepe di Ribera, Luca Giordano, Pacecco di Rosa, Aniello Falcone, and Mattia Preti, names of painters whose acquaintance I deepened or made for the first time.

If Naples is like the Bronx, Florence feels like Boston, sedate and somewhat buttoned-up. Significantly, there is little influence of the Baroque; the monumental austerity of its historic buildings is relieved by ornament of chaste gracefulness, and by the intrinsic beauty of its stone, grey, green, and gold. One of the greatest of these, the Palazzo Strozzi, situated on what is possibly the most beautiful street in the world, the Via de’ Tornabuoni, housed a once-in-a-lifetime exhibition that explored the influence of Donatello, a sculptor of amazing range and originality, on his successors of the 15th and 16th centuries. As always, the Uffizi and Accademia were over-crowded, the latter with bucket-listers intent on taking selfies in front of the David, though the uncrowded halls of the Bargello or the Museo di San Marco are just a block or two away. Nonetheless, as the tourists poured into Florence in the latter part of May, I made short trips to cities where they were scarce, including Pisa, and Bologna, Italy’s food capital.

The great medieval trading city of Pisa is damned with faint praise in many a guidebook, and most tourists are there only to see “the Leaning Tower”. But the Romanesque cathedral of which it is the belltower is majestic, its Pisano pulpit is a masterpiece, the city is charming, and the cathedral museums are first class. On the other side of the walled city, far from the tourist track, is the Museo Nazionale di San Matteo, open this spring for just a few days in the week with entrance at strictly limited times. Not knowing what to expect, I turned up at the appointed hour, along with a high-school class, and about four other adults, all of whom disappeared after about forty minutes, leaving the solitary guard to trail after me for the next two hours, as I explored what is probably the most important museum of medieval art in Italy. It was a very Italian experience.

The other experience I wish to recall here was a visit to the Pinacoteca of Bologna, to see its collection of 17th-century Bolognese and Emilian painters, notably the Caracci and Guercino (San Sebastiano curato da Irene), as well as 16th masterpieces by Parmigianino (The Mystical Marriage of Santa Margherita) and Raphael (Ecstasy of Saint Cecilia). The picture that had the biggest impact was an altarpiece by a quattrocento Ferrarese painter, Francesco del Cossa. Sadly, its once vibrant colors have faded, and one is tempted to glance and move on: but as I have found before, even a sadly damaged work of art can work its magic on you, if you give your attention to it. What you can’t do is just glance at a picture and expect results: you have to look, and keep looking; and as you do so, it will begin speaking to you. That’s true not just of visual art, but also of music, literature, and scripture.

After the intensity of cardio-culture completism in Italy, I returned to the States for a more traditional sabbatical experience, at the University of the South at Sewanee. In the immense wooded Domain of the University, perched on an escarpment overlooking eastern Tennessee, there are miles of hiking trails, and a library in which to browse. I haven’t had access to a university library, let alone one with a whole floor devoted to theology, in more than three decades. So it was a pleasure to spend some days in the library, and to conclude them with an hour in the Ralston Listening Library in the company of Tam Carlson, an old friend of Fr Ralston and of this parish, a professor of English, and the Ralston Listening Library’s guiding spirit. If my Italian sojourn was about looking seriously at works of art, the visits to the Ralston Listening Library were about listening seriously to the best recorded performances of the greatest works of music on equipment of the highest audiophile quality. And just as looking at paintings and sculpture is not just giving something a quick glance, so also listening to music is not just hearing something in the background: it is the discipline of giving one’s undivided attention to a work of art. You can’t treat them like (aural or visual) wall-paper.

William Ralston, as many of you will remember, the rector who did the most to shape St. John’s as we know it today, was a native of Kentucky, a priest and professor at the University of the South; first in the Faculty of Divinity, where he taught moral and philosophical theology, and then in the Arts Faculty, where he taught English literature. In his time he was perhaps the most popular lecturer in the entire campus, and those who have sat under his pulpit or podium will know why. In his eloquence was a passionate commitment to the good, the beautiful, and the true, and you could not hear him without being infected by something of the same passionate commitment. (He would often quote – with reference to the liturgy – the words of his beloved Toscanini to an orchestra after it had turned in a perfunctory performance: “itza not routine, itza Beethoven!”).

A great lover of classical music, over time he built up a large and systematic collection of fine recordings of first-class performances, which after his death, and through the donations of his former students and parishioners, became the core of the Ralston Listening Library. It is an institution perhaps unique in North America and one that is successful in transmitting a knowledge and love of classical music to university students – no mean achievement in a world swamped by commercial mass music. It is remarkable also, because it runs against the strong currents of ignorance and contempt for the past that are present in our culture, even or especially in the academy, where the legacy of the past is often dismissed as irrelevant, or condemned as oppressive and unjust – a simplistically moralistic rush to judgment that itself generates oppression and injustice. Ours is an age that could be characterized as the great Forgetting; a kind of willed amnesia has overcome us. As in the human personality the loss of memory leads to the breakdown of the reason and will, so in human society the loss of roots in the tradition that formed us and from which we come is destructive in every area of human endeavor. As Robert Crouse said: “we moderns have drunk deeply from the waters of Lethe [the river of oblivion], and forgetfulness is perhaps the characteristic malaise of both Church and society in general in our time. Impoverished by forgetfulness, deprived of tradition, we have no ground of judgment in the present, and no lively anticipation of the future.” If we are to bring forth fruit in present and future, it will be from roots that go deep into the tradition from which we come. A thoughtful appropriation of tradition is the path of genuine creativity and renewal.

This past Sunday, to mark my thirtieth year as a priest, along with a remarkable brass rubbing, the parish presented me with three books of classical Anglican divinity in venerable seventeenth century editions: Pearson on the Creed, Rodgers on the Articles, and the Elizabethan Homilies. To hold these books in one’s hands, is to experience a living connection with the definitive period of the Anglican tradition, and to read them is to root oneself in the fertile soil of this tradition, for the sake of present and future fruitfulness. I can’t think of a more appropriate gift.

This essay by Fr. Dunbar was published in the July 24 and July 31 issues of the St. John’s Parish Paper. Image: Wikiart.org, Mystical Marriage of St Catherine of Alexandria by Guercino