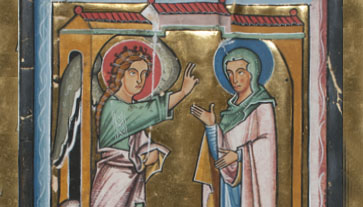 “The Spirit and the bride say, come. And let him that heareth say, come.” (Revelation 22:17). With the voice of the Spirit and of the Church we are invited to join our own, as we do in the haunting Advent hymn, O Come, O Come, Emmanuel, a 19th century translation of a medieval hymn, itself based on a very early medieval series of richly scriptural antiphons sung in the last eight days of Advent, the “Great O” Antiphons (so called, because they begin with the vocative particle, “O”). The point of Advent, is that we learn to hope and pray for the coming of Christ.

Behind these Advent prayers stands the great petition in Psalm 80, which shaped the “stir up” collects of the season, “Before Ephraim, Benjamin, and Manasseh, stir up thy strength and come!” Psalm 80, as the note in the Geneva Bible puts it, is “a lamentable prayer to God to help the miseries of his Church, imploring him to consider their first estate, when his favor shined toward them, to the intent that he might finish that which he had begun”. That is, we ask the Lord to come, because he has already come; and our past experience is the basis of present expectancy; memory the matrix of hope; and what we seek is the restoration, the renewal, and the completion of what he began.

Likewise in Revelation 22. The Spirit that says “Come”, is the Spirit by whose overshadowing Christ was conceived of the Virgin Mary, who was poured out on the disciples of Jesus for the publishing of the gospel, and is the same Spirit who moved over the deep in the beginning to bring the world into being. Of all those beginnings the Spirit now demands the completion, the fulfilment in Christ of God’s purposes for us and for creation. With the Spirit speaks “the bride”, that is, the Church, with whom we are invited to join our own voice: “Let him that heareth say, come”. It is not taken for granted that we should do so, and in fact the Church’s true voice is often muffled or drowned out by other voices, not only the chorus of strident worldly agendas, but also by the voice of well-meaning, muddled, and ineffectual piety.

For us to join our voices with the Spirit and the Church, we must know what it means to ask him to come; and we can only know what to expect of his coming if we know him as he has already come. Memory – the memory embedded in the Scriptures above all – is the matrix of hope: “whatsoever things were written aforetime were written for our learning, that we through patience and comfort of the scriptures might have hope”. We give ourselves to hear the Scriptures, to read, mark, learn, and inwardly digest them, that we may embrace the hope which they offer.

And what the Scriptures teach us, is that the coming of Jesus, his being called to our side (‘paraclete’) in that closed system we call ‘the world’, chastens its pretentions, while also opening possibilities of which that closed system is not capable. Where Jesus came demons are cast out, the diseased are healed, the dead are raised, defilement cleansed, and debts are forgiven, above all the crushing burden of guilt and fear; and though the unbelieving world recoils and reacts in hostility, yet notice has been served: its time is up; and it’s time also for us to switch our loyalties from worldly pretenders to the world’s true king.

Don’t mistake me: I am not turning “Jesus” into a magic wand to wave all our troubles away. But in his coming, even in our praying for his coming, there is something else here besides our anxieties, sorrows, and failures, a new and untameable power, which sets us free from their vise-like grip. Winter may continue for a while, but already “Aslan is on the move”, and even in our griefs and sorrows there is reason to take heart. The one who has come, will come, and is even now coming. “Surely I come quickly. Amen. Even so, come, Lord Jesus” (22:20).

Said before and after the Magnificat.

O Lord of Lords, and Leader of the House of Israel, who appearedst in the bush to Moses in a flame of fire, and gavest him the Law in Sinai: Come and deliver us with an outstretched arm. (Exod. 3:14; John 8:58).

O Root of Jesse, which standest for an ensign of the people, before whom kings shall shut their mouths, and to whom the Gentiles shall seek: Come and deliver us, and tarry not, we beseech thee. (Isaiah 11:10; Rev. 22:16)

The other antiphons will be published next week.

This essay by Fr. Dunbar was published in St. John’s Parish Paper on Dec. 11, 2022. Image: WikiArt.org, Manuscript Leaf with the Annunciation