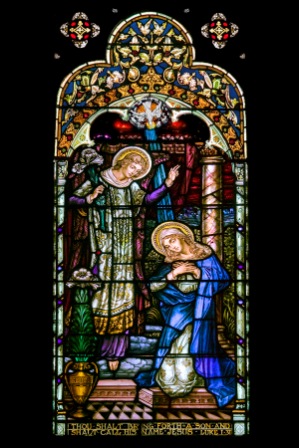 Mary, the New Eve: In the creation account of Genesis 2, God says that it was not good that Adam was alone. So he caused a deep sleep to fall over him, and he took from his body a rib and formed woman out of this rib. And Adam saw the woman and said, “Bone of my bone and flesh of my flesh.” This was Eve, Adam’s help mate; her name simply meaning life, her body containing in itself the possibility of new life.

There in the garden, humanity dwelt naturally with God and in communion with one another. But we know how the story goes: Adam and Eve fail to trust that life is found in friendship with God. They begin to doubt that he wants the best for them. They imagine that God is keeping things from them. And they succumb to the temptation to see themselves as rival gods.

And so follows the whole sad story of discord and division and evil and murder that Genesis tells of life outside of the garden. It is as if a bomb went off, sending what once was perfectly whole into disarray and disorder.

Of course, we know that God’s loving kindness would not allow for this to be the end of the story. The rest of the Old Testament tells the story of how God puts into action a plan to call all things back into communion with him — a sort of reverse bomb: a power that creates unity out of chaos.

He begins by calling out of obscurity a peculiar people; a people whom he decides to reveal himself to. This people come to know him as the one true God, who is “I AM.” They learn that there are no other gods before him. They come to trust that he is not indifferent, but that he cares for them. They learn that he is holy. And they come to recognize that to move away from this God is to move toward death and to move closer to him is to live.

There are bumps along the way. This God wants to be their king, but they want to be more like the other nations. Their peculiarity is a bit embarrassing. So God gives them a king, but reminds them that really he is their king. There are ups and downs, and eventually the whole thing falls apart again. So he sends them prophets to announce what the real plan is. There will be a king, but he won’t be like the kings of other nations. And this will be the sign: “Behold, a virgin shall conceive, and bear a son, and shall call his name Immanuel.” (Is. 7:14). That is: God with us.

Here is the center point of God’s plan to bring things back into unity from the chaos and destruction wrought by sin: a young, rural, unwed woman. It is Mary. She is the hinge between the Old and New Testaments. She is the burning bush. She is the ark of salvation. She is the new Eve. Instead of being made from Adam’s body, God takes from her body and makes a new creation. God takes up residence in her womb and the unity that he intended with man from the beginning is realized in the person of his Son, Jesus. From Mary’s body, God took a body. And it is through his body that we have salvation.

This same body that our Lord took from his blessed mother now sits enthroned in glory, drawing all things back into unity with God.

To be a Christian is to be a member of Christ’s body, the Church. It is through baptism that we are engrafted into his body. And it is in the eucharist that we are fed from his body. We are connected to one another and to every other Christian by our common membership in this same body — a body that now exists outside of time and space.

But when we speak of the mystical body of Christ we are not simply speaking of some grand metaphor. We are instead speaking of the body of Jesus. The body that he took from his mother. The same body that was crucified, died, and was buried. The same body that God raised and that ascended to the Father. We are talking about that particular body. We are not members of the “idea” of Christ, we are members of his actual body, the one that Mary gave him.

We are a peculiar people. We are God’s peculiar people. It would be easier to say that we are members of a religious club. But we are not. We are members of a particular body: a body born in Bethlehem and reared in Nazareth. And as we are members of Christ’s body, brothers and sisters of Jesus by adoption and grace, so Mary is our mother. Because Jesus’ human body is essential to our salvation and to what the Church is, Mary’s particularity too is essential. It is through her that God’s plan of salvation took flesh.

Hail Mary full of grace, the Lord is with thee. Blessed art thou amongst women and blessed is the fruit of thy womb, Jesus.

This essay from Fr. Jonathan Jameson was published in the St. John’s Parish Paper on Sunday, May 29, 2022. Image: A Stained-glass Window at St. John’s Church.