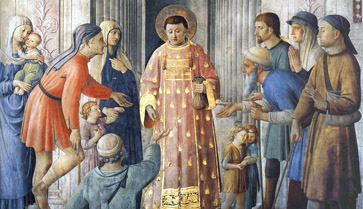 He appears often in altarpieces of the Middle Ages and Renaissance, usually dressed in a gorgeous deacon’s dalmatic, and readily identifiable by the gridiron, his attribute: St. Lawrence – rendered as Laurentius, Laurent, or Lorenzo – perhaps the most celebrated martyr of Rome after Peter and Paul. We know that he was one of the seven deacons of the church of Rome, charged with administering the church’s social welfare ministry to the poor; that in the year 257, the emperor Valerian published edicts against the Christians, that Pope Sixtus was arrested and executed in 258 (August 6th), and that four days later, August 10th, Laurence also became a martyr. The veneration his witness inspired began early; in 330 AD a basilica (still standing) was built over his tomb; and in the late 4th and early 5th century, his cultus spread throughout the Christian world, promoted in sermons by Prudentius, Ambrose, Augustine, and Leo the Great – which is why his name is still common today, even if only in the form of “Larry”!

Those are the bare historical facts; but it is his legend, embellished with lively dialogue and picturesque detail, that stirred the imagination of the Christian world. When Sixtus was arrested and led away to his execution, Laurence is said to have followed him, saying, “Where are you going, father, without your son? Where are you hurrying, holy priest, without a deacon? You never used to offer the holy sacrifice [the eucharist] without a minister?” Ordered by the city prefect to surrender the contents of the church’s treasury, Laurence asked for three days to assemble them, and then gathered the poor, the disabled, the widows and orphans on whose food and clothing he had spent those funds, and invited the prefect to come inspect the treasure of the Church. For his insolent “cheek” Laurence was condemned to death by grilling over a slow fire on an iron bed – the gridiron that is his chief attribute in sacred art. Yet even after long torment, Laurence remained defiant: “I am well done on this side, so turn me over”. When the prefect gave the command, Laurence invited him to test whether he tasted better cooked or raw. (No wonder Laurence became the patron saint of cooks.)

Killjoy historians have pronounced this grisly repartee to be fiction, but its appeal falls in the same category as the (unprintable) defiance of the Russian navy reported to have been made by the Ukrainian defenders of Snake Island. If it’s not literally true, it’s in the category of things that ought to be true: and it captures the cheeky attitude of the early Christian martyrs, their uncowed defiance which the pagan authorities found so exasperating. [As Augustine put it, “it is a holy thing and pleasing to God that we venerate the birthday, i.e., day of martyrdom, of Saint Laurence with special devotion because the Church of Christ, victorious by his radiant flames, on this day beams her light over the world”.] Like the Snake Island story, its value is not found in the bare facts, but in its power to capture the imagination, and inspire the spirit to resist overwhelming odds. In a world where godless tyrants are once more roaming, that cheeky defiance may well prove to be needed again.

Among the many works of art inspired by the legend of Laurence is the church of San Lorenzo in Florence. Founded in the 4th century by St. Ambrose (one of the chief promoters of the cultus of Laurence), it was rebuilt to the designs of Brunelleschi by the Medici in the 15th, as their parish church and family burial place. Famous for the works of art it contains – bronze reliefs by Donatello in the nave and the Old Sacristy, marbles by Michelangelo in the New – the building itself is a landmark of the early Renaissance, and a notable example of architectural symbolism. It revives the early Christian cruciform basilican plan, symbolic of the crucified Christ, and his mystical Body, the Church. A hemispherical dome over a square crossing, and the semi-circular arches over the colonnades show forth the Church as the meeting place of heaven and earth. The carving of the classical orders revived by Brunelleschi is exquisite; but, as the art historian Christoph Frommel notes, “it is enough to enter San Lorenzo to experience its light-filled spaciousness, the harmony of its proportions, the measured movement of its arcades toward the hierarchical center of the crossing”. What constitutes that harmony is a three-dimensional grid of squares, in proportions derived from music, of 1:1, 1:2, 1:3, and 1:4. Those squares are only visible in the pattern of the floor, but they compose (as Loren Partridge notes), “a harmonious plan that tuned the church to resonate with divine harmony”. Thus is the grid on which Laurence was tortured and where he met his earthly death, transmuted, and transfigured into heavenly glory.