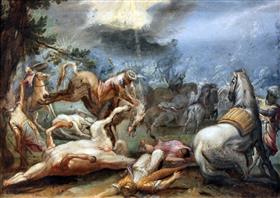 “Right dear in the sight of the Lord is the death of his saints”. On the feasts of the saints, the Church celebrates the witness to Christ that they completed by their death, and their entrance into supernal glory. There are three exceptions to this rule: the Nativity of John the Baptist, the Annunciation of Saint Mary the Virgin, and the Conversion of Saint Paul the Apostle (which falls this week on Wednesday). Each of the first two in its own way marks a turning point in salvation history: but what of the Conversion of St Paul? How can the conversion of one individual be a turning point in salvation history?

In revivalistic Christianity, conversion is often understood as an intense emotional experience. An experience it is, and one that often involves the emotions, though “high emotional temperature” as Robert Crouse drily remarks, “is no clear symptom of conversion”. (Fr Ralston would recall hearing an excited radio preacher exclaim, “Oh, Oh, I don’t know what I am feeling, but Oh, how I feel it!”) Sometimes, as in Paul’s case, it involves special effects; but (as Crouse also said), ‘Conversion is not fundamentally a matter of blinding lights and secret voices, but a matter of a new integration of personality around a new centre, a new focus of insight and energies. “I live, yet not I, but Christ in me” (Gal. 2:10)’.

That’s why conversion, turning to Christ, recentering the energies of the mind and will on him, entails our ongoing transformation by the renewal of our minds, transformation “from the inside out”, no longer conformed to the world, but reformed in the likeness of Christ by the working of his Spirit.

What Saint Paul’s conversion also shows us is that the conversion that begins in the inner life of the individual does not stop there: for conversion is not only recentering insight but also refocusing vocation. Jesus appears to Paul on the way to Damascus, because he is a “chosen vessel” to bear the name of Jesus among the Gentiles, “to open their eyes, and to turn them from darkness to light, and from the power of Satan unto God, that they may receive forgiveness of sins, and inheritance among them which are sanctified by faith that is in me” (26:18). The zeal Paul poured into ferocious persecution of the church must now be invested in the fervent preaching of the gospel.

Paul was not the first to take the gospel to the Gentiles. Peter’s ministry in Caesarea (Acts 10), and Barnabas’ ministry in Antioch (Acts 11) show us that it is the Spirit who leads the way, and the Church plays catchup as best it can. Though Paul then takes a leading role in the first intentional mission to the Gentiles, he does so only in a team that includes others like Barnabas and Silas, Aquila and Prisca, Timothy and Titus; and long before he arrives in Rome there was a mixed congregation of Jews and Gentiles, and this must have been true in many other parts of the Mediterranean world as well. In addition, before Paul’s conversion, the conversion of Cornelius had already taught Peter that you don’t need to be Jewish in order to be Christian, and that salvation is by the grace of Jesus Christ, and not by doing the works of the law (Acts 15:7-11). So Paul is far from a one-man show – the besetting temptation of too many charismatic religious personalities. Yet Paul holds more tenaciously to the principles than anyone else, when even stalwarts like Peter and Barnabas were temporizing on the exemption of Gentile converts from legal observance of the law (Galatians 2:11ff). And no one articulated as clearly and extensively, and in writing, the rationale and implications of the gospel for the doctrines of Christ and of the Spirit, of justification, moral life, the church, its ministry and sacraments, of Christian hope in the face of death. It took centuries for the Church to absorb Paul’s teaching, and it is still absorbing it, for there is a lot to absorb, and it must always be overcoming our native inclinations to Pelagian self-help; yet somehow, from the beginning, enough Christians recognized the importance of these writings to preserve and honor them as scripture. Without them our grasp of the gospel would be sadly impoverished.

By conversion, Paul receives a vocation of conversion, and so it is with our conversions also; in them we are caught up in the conversion of the whole human community, indeed, the whole creation, the return of the creature to the Creator, and its being refashioned in glory. This is not the work of man, but the work of God in bringing us to himself. So our prayer must be: “Turn thou us, O good Lord, and so shall we be turned” (Cf Lamentations 5:21). “Turn us again, O God, show the light of thy countenance, and we shall be whole” (Ps. 80).