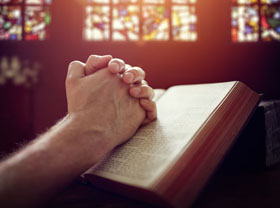 Scripture is replete with building projects. Entire chapters detail the building of the Tabernacle of Moses, the Temple of Solomon, the House of David, and after the return from exile, the rebuilding of the Temple and of the walls of Jerusalem, not to mention visionary versions of the same in Ezekiel. Grand building projects do not feature in the New Testament, where Jesus points to their inevitable fate: “there shall not be left one stone upon another, that shall not thrown down” (Mark 13:2). Yet the imagery of building pervades the New Testament: “whosoever heareth these sayings of mine, and doeth them, I will liken him unto a wise man, which built his house upon a rock…” (Matthew 7:24). Most significantly the language of building, temple, and city, is applied metaphorically to the structured communities that grew up in response to the gospel. “Know ye not that ye [i.e. Christians collectively] are the temple of God, and that the Spirit of God dwelleth in you?” (1 Corinthians 3:16). And the “edification” of the neighbour – what “builds up” others in the faith and unity of the church – becomes one of the chief criteria for action. “Let us follow after the things wherewith one may edify another“” ”(Romans 14:19).

The Bible’s building story starts, however, not with the action of men, but of God. The world which he creates by his Word and Spirit is a kind of building, covered by the vault of the firmament, providing a place in which all creatures can live and flourish, but especially the human beings who bear his image and act for him among other creatures. It is also a garden – a place that nourishes and delights – in which God himself is present, “walking in the garden in the cool of the day” (3:8), and talking with human beings. His presence vouchsafes to them the gift of communion and fellowship with him, a presence that enables us to glorify and enjoy his infinite goodness and beauty and truth. Man is made to live in God’s presence, to grow up in his grace, to glorify and enjoy his infinite goodness, and only thus can he attain full humanity. Apart from God’s presence, man cannot be fully human, cannot be all that he is meant to be.

The fall therefore is a calamity, a non-reversible, self-inflicted wound that separates man from God, that sets him at odds with Creator and the whole order of creation, and everything in it, including himself. From man’s side there is no way back: the angel stands at the gate with the

flaming sword. The long history of salvation set forth in the Scripture maps the rescue operation and recovery plan of the Creator, which unfolds throughout history, but is centered in the history of one people, wherein the promise and pattern of man’s return out of alienation from God into communion and fellowship with him is slowly unfolded until it comes to fulfilment. It is the story of God’s building a spiritual house, a place of communion and fellowship with man.

This long story begins with the story of Abraham (Gen 12-25). God speaks a word of promise and of command to Abraham: for the sake of the promised blessing he is to abandon his homeland for a land that God would show him. Abraham obeys with the obedience of faith, and in the land God once again speaks to him, to promise possession of the land to his “seed” (a term that means offspring or descendants). In response, Abraham “builded there an altar unto the Lord who had appeared unto him”; and again, in a new location in the land, “builded an altar unto the Lord, and called upon the name of the Lord”. An altar is not a temple or a city, but it is indeed something “builded”; and the purpose of this building is directed to the presence of God. For in the building of the altar, in the offering of sacrifice, in calling on the name of the Lord, Abraham acknowledges the Lord who spoke to him words of promised blessing as his own God, and demonstrates his resolve to cling to the promise God, in faith and love, in prayer and thanksgiving. That’s what sacrifice is: a means of clinging to God, of cleaving to God, of adhering to God, of having fellowship with God. As Augustine said, a sacrifice is every act that is done for the sake of communion with God. When we make over to God something of our own that is precious to ourselves, with prayer or thanksgiving for some good, we are acknowledging our dependence on him, and our desire for his favor and fellowship. We are surrendering ourselves to him, so that he may take us as his own.

The building of the spiritual house where God dwells among his people in favor and fellowship begins with the building of the altar, in calling on the name of the Lord in prayer, and in the offering of sacrifice. We are not our own, we belong to the Lord; and the gifts we give – the alms and oblations we offer – are the tokens of our allegiance, our desire, and gratitude for his presence.

Abraham builds altars and calls upon the name of the Lord, offering sacrifices for the sake of fellowship and communion with the God who spoke to him words of promise and covenant. But these are the only structures built by Abraham. It is only when this same God remembers his promises to Abraham, and sends Moses to bring his descendants, the children of Israel, out of slavery in Egypt, only then does he command them to build. In obedience to his command, Moses and the people build a tabernacle, and when it is complete, “the glory of the Lord filled the tabernacle” (Exodus 40:34).

The tabernacle therefore does not house the assembly of Israelites at worship (like a church): it is house of God, a visible sign of his invisible presence among his people as their God. The people gather outside, for acts of prayer and sacrifice at the altar of sacrifice; the God of Israel dwells within, in the Holy of Holies, enthroned “between the cherubim” that frame the ark of the covenant with their wings. Between the Holy of Holies, which only the high priest enters, and that but once a year, and the courtyard outside where the people assemble for worship, is a porch and an ante-chamber, the Holy Place, which the priests entered twice-daily to offer incense. Outwardly the tabernacle is weather-proof skins; inwardly it is splendid in richly dyed linen hangings. The whole physical and ritual structure shows forth that the fellowship of the invisible Creator with the visible creature, the Lord with his elect people, the holy God with sinful men, depends on the offering of sacrifice, and the mediatorial ministry of priests who represent the people to God in prayer and sacrifice, and God to his people, in oracle and blessing.

The tabernacle is a tent; designed to be taken down, carried, and set up, wherever God led his people in their journey and sojourn in the wilderness. When it is replaced, according to David’s intentions and Solomon’s execution, by a permanent structure, a temple of stone, it is a sign that God’s promises to Abraham have been fulfilled, and the people have entered into and taken possession of the land God had promised them, which is an earnest of the rest God has prepared for them. Yet the very structure of the temple itself indicates that the fulfilment of the promises of presence made to Abraham is partial at best; a preparation and an anticipation, but not the full realization of communion between God and man. When the people are not faithful to the covenant obligations, and make the temple a source of false assurance of security; and under the judgment of God, then all that has been done in fulfilment of the promises made to Abraham is undone: Solomon’s temple and David’s city are destroyed, and the people led by Moses and Joshua out of slavery into possession of the land, are taken captive, uprooted, and exiled. Israel returns to the wilderness, that it may return to the God of Abraham. Subsequently there is a return from exile, a rebuilding of the Temple, first in modesty by Ezra, and later with splendor by Herod, but there is no change in the provisional and preparatory character of these arrangements.

The full realization of the promised presence of God, comes not in a temple of stone (which is why the destruction of the Temple by the Romans in A.D. 70 is of secondary importance), but, as the apostles testified, in the man Jesus Christ. That is why John testifies that in Jesus, the eternal Word of God “was made flesh and dwelt” – literally, “tabernacled” – “among us, and we beheld his glory, the glory as of the only-begotten of the Father, full of grace and truth”. Jesus is not only the true Tabermacle in our journeying and Temple of our destination, the true locus of God’s glorious indwelling presence among his people, but he is also the true Priest, offering himself in the true Sacrifice, that establishes the new and eternal Covenant, and redeems his people in a new and eternal exodus, for the inheritance of eternal life. In him the mediation of invisible Creator and visible creature, God and sinners, is now achieved and perfected. As a result of that perfect mediation, the new people of God – those who believe in him and in the gospel – are brought inside the Tabernacle, as full partakers of the divine presence. “Having therefore, brethren, boldness to enter into the holiest [the Holy of Holies] by the blood of Jesus, by a new and living way, which he hath consecrated for us, through the veil, that is to say, his flesh; and having an high priest over the house of God; let us draw near with a true heart in full assurance of faith….” (Hebrews 9:19ff).