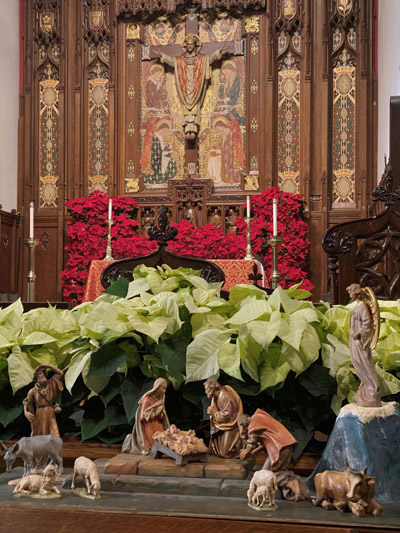 Our service on the Sunday after Epiphany is always grand and beautiful, as we commemorate the journey of the magi, with candles in procession. Several years ago the temperature had dropped sharply the night before the Sunday after Epiphany, and (as we subsequently discovered) a number of critters (there may have only been two but if so, they had the impact of many) had taken refuge in the church, like the beasts resorting to the ark. My first notice came as incense was being blessed inside the altar rails, and a flying squirrel appeared in our midst. I thought momentarily of hurling myself on top of him, but decided my bones might be the only casualty. Much of the service passed without incident – the critters had perhaps taken refuge in the thicket of poinsettias – but when the parishioners began to make their way to the altar for communion, they evidently panicked, and as they began to seek refuge below the pews, the parishioners began to act in ways uncharacteristic of Episcopalian customary decorum: stifled giggles, sotto voce exclamations, abrupt and obtrusive changes of place and posture, as they sought to avoid the incursion of the critters. One parishioner won my heart when she shrieked, and then abruptly choked the shriek, even more horrified by the fact that she had shrieked in church, than that some varmint had just scuttled past her feet. At the door we had many compliments on the grandeur of the service and the excellence of the sermon, but one worshipper summed it up with shining eyes, as “the most exciting service ever!”

A New Year of Grace

There are many different ways of counting time, and the present system of dating them from the Lord’s incarnation was devised by a 6th century Scythian monk called Dionysius Exiguus (“Skinny Denis”), though the system was only popularized by the Venerable Bede. Dionysius seems to have miscalculated by a few years – we now know that Herod the Great died in 4 B. C., so Jesus must have been born shortly before that – but the symbolism remains the same. The coming of God in the flesh is the great turning point in history, the once-for-all event that fulfilled in time the eternal purpose of the Creator for his creation. And it also means that every year of the Lord – “anno domini” as we used to say before the euphemistic “common era” took hold – is a year in his grace, which we should be fools to squander. “Behold, now is the accepted time, behold now is the day of salvation”: Time is not something you spend, I read recently; it’s what you invest, and the question is, what shall I invest it in? what brings the best return on my investment?

If you made New Year’s resolutions, in all likelihood they include resolutions to eat, drink, and spend less, and to exercise and save more. Perhaps you have some other plan of self-improvement in prospect: to declutter and re-organize attics, garages, closets and drawers, to spend less time with screens and more time with people who matter to you. Perhaps you mean to be more frequent in attendance at church, to read the Bible every day, or to engage in ministry with those in need. (If so, we have an after-school tutoring opportunity you should consider.)

All worthy objects, but the crucial question is this – and it applies as much to the religious as to the worldly forms of self-improvement: for what end are you undertaking these projects? If we are doing them for the great God Self, then we are no better than pagans with a faintly Christian veneer, and we have made liars of our solemn prayers, when we asked for and received the assurance of God’s mercy, the forgiveness of “all that is past”, the grace “ever hereafter” to “serve and please [him] in newness of life, to the honor and glory of God’s Name”. How can we serve and please the Lord, if we are serving and pleasing the Self? Financial health, fitness, de-cluttering, re-organizing, relationship-building, Bible-reading, church-attendance, helping the needy – these are all good things, but only if they are used as means of fitting ourselves for our true end, which is nothing else than the glory of God.

So are we undertaking these things for the glory of God? Do they equip us to bring glory to his name, to build up his church and people in the faith, to bear witness to the gospel to the world? Are we seeking our own glory, currying favor, working the angles? “Not with eyeservice, as menpleasers; but as the servants of Christ, doing the will of God from the heart” (Eph 6:6). Scripture warns us that everything that is sought “under the sun” is ultimately in vain (Eccles 1:14), that the games of worldly ambition are not worth the candle; but Scripture also tells us to “be always abounding in the work of the Lord, forasmuch as ye know that your labour is not in vain in the Lord” (1 Cor. 15:58). “Choose this day whom you will serve” (Joshua 24:15) – and Happy New Year!

This essay by Fr. Dunbar was published in St. John’s Parish Paper on Jan. 8, 2023. Image: The Nativity display at St. John’s